Artwork of Don Wright, a native of Shreveport, La., may be found in some of the bedrooms at the Stockade.  Although he remained a resident of Louisiana, he was quite well traveled. After graduating from Franklin High School in 1957, he enlisted in the U.S. Navy where he served until 1961. Following his military days, Wright joined an exploratory seismographic company that allowed him to experience the glaciers of Alaska and Canada, the beaches of the Bahamas, and most of the terrain between them.

While with the seismographic company, his interest in art began to grow. At the age of 24, Don Wright began attending classes at Southeastern Louisiana University. After completing his BA, he was accepted to an MFA program at the Pratt Institute of New York. He finished the Pratt Institute in 1970 with an emphasis in painting, drawing, and, what he would later call his favorite medium, sculpture.

Like most established Louisiana artists, he became known for his paintings of rural landscapes and of the old Vieux Carre, His style of 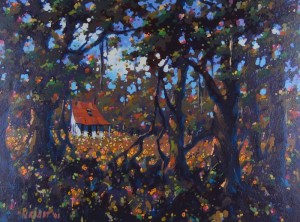 painting is always unmistakable, but it can be found in subjects ranging from swamps to nudes and courtyards to cabins. In his own words, Wright said of his art: “My intent is to infuse internal reality within the artist with outside stimuli, the product being the finished art object. I deliberately subordinate all questions of style, technique, subject, and medium to this simple credo.”

Prior to purchasing the Stockade, Janice was an art dealer.  She and Don were good friends as well as artist and art dealer.  They spent time together and often went to charity events where Don’s work was being auctioned.  Janice spent time at his studio in Hammond and they visited local restaurants, art venues and theatres.  Don often called Janice when he was working on a painting and wanted to get feedback.  It is fitting, therefore, that much of his artwork adorns the walls of the Stockade.