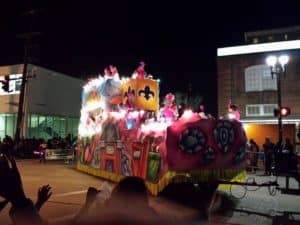 The culmination of the Christmas and New Year’s Holidays means one thing in Louisiana: It’s Mardi Gras time! There are several unique parades in Baton Rouge which take place not only on Fat Tuesday, but also leading up to Mardi Gras Day, each having a different history, unique theme and created for a different purpose:

The Oshun Parade was formed to bring back the idea of African American parades in the Capital City as it once was in 1947. This parade rolls in the historic area of Scotlandville and features the culture and heritage of North Baton Rouge. Several local high school bands and the Southern University Human Jukebox marching band will be featured. This year’s parade will showcase Mardi Gras Indians and the historic black cowboys of Baton Rouge on their horses. It will conclude with a festival of activities, food, contests, music and performances, along with a battle of the bands from local high schools.

Krewe of Artemis Parade
This parade is touted to be the first and only all-female parading Mardi Gras Krewe. It was founded in 2001 and its mission is to focus on a family-style event to be enjoyed by people of all ages. The parade features a full-length New Orleans style night parade that winds its way through downtown Baton Rouge. Annually, it is held two Fridays before Mardi Gras Day.

Krewe of Mystique
The Krewe of Mystique claims it is Baton Rouge’s oldest parading Mardi Gras Krewe! It was formed in 1976 by two krewes who decided to put on a parade. The word “mystique” in its name is a designation applied to krewes that will not reveal the identities of their royalty until the opening of a parade or a ball. Its mission is to bring Mardi Gras to Baton Rouge.Today it is one of the longest running parades in the city.

Krewe of Orion
The Orion constellation is one of the most prominent and recognizable constellations in the night sky. These bright stars are the inspiration for this Mardi Gras krewe that bears its name. It was founded in 1998 by two young men who had a desire to bring the spirit and tradition of Mardi Gras to Baton Rouge. 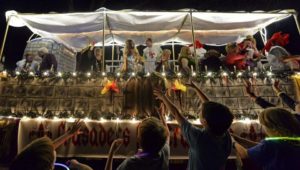 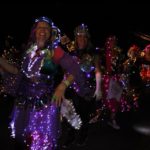 due to his inspiration in experiencing the Flambeaux, which were common in nighttime parades in New Orleans, in the 1970’s during his residency at medical school. The Southdowns Flambeaux always lead the parade to embody the firey heart and soul of Southdowns. The parade features the Glo Glo Dancing Girls. Its floats are originally decorated and hand-built, reflecting the artistic creativity for which the Krewe is known.

Choose the parade that appeals most to you, or attend all of them. You don’t want to miss Mardi Gras in Baton Rouge! Book your room now at The Stockade Bed and Breakfast.