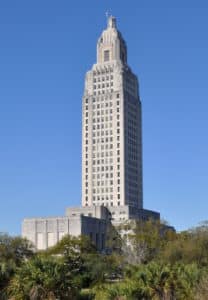 Soaring at 450 feet high, it’s impossible to miss the current Louisiana State Capitol as one comes into Downtown Baton Rouge. The 34-floor building stands on a 27-acre tract of land. The Observation Deck on the 27th floor overlooks the City of Baton Rouge, and the glimpse of the gardens is spectacular. This Capitol was the dream of Governor Huey P. Long and became a symbol of history, pride and the spirit of the Louisiana people. It will forever be entwined with his political career. It was actually part of his political platform when he was running for the Governor of Louisiana. Unfortunately, it was the site of his assassination. The Capitol is listed on the National Register of Historic Places and designated as a National Historic Landmark. 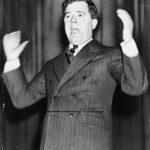 On September 8, 1935, Huey Long was assassinated in the State Capitol by Dr. Carl Weiss, who was gunned down shortly thereafter by Long’s bodyguards. Long died 2 days later. He was interred on the grounds in front of the Capitol.

The Capitol was designed to be a modern skyscraper. Huey Long insisted that it be a tower. Building materials were delivered to the site by 2,500 carloads by the Yazoo and Mississippi Valley Railroad. Huey P. Long wanted the building to be completed during his lifetime, so work progressed rapidly. Construction began in December of 1930 and it was completed in a little over a year, however, it was not dedicated until May 16, 1932, during the inauguration of Governor Oscar K. Allen.

The façade of the Capitol was constructed out of limestone from Alabama. It is decorated with many sculptures and reliefs, including several of Louisiana’s symbols and history. Between each column on the outside of the House and Senate chambers is one of twenty-two portraits of important persons in Louisiana history. Forty-nine granite steps lead to the front doors. Each step is engraved with the name of a U.S. state in order of its statehood. Alaska and Hawaii, added after the completion of the Capitol, are both on the last step.

Flanking both sides of the stairs are limestone sculptures entitled “Pioneers” and “Patriots”, memorializing both the early settlers and defenders of Louisiana. On either side of the front doors are reliefs depicting symbolic scenes of government.

The front entrance opens directly into a four-story rectangular Memorial Hall, often referred to as a “rotunda” despite not being round. Embedded in the floor is a bronze plaque depicting a relief map of Louisiana, showing parish boundaries and seats, industries and exports, and the flora and fauna of Louisiana. The flags of the entities that have held dominion over Louisiana are mounted on the balcony over the elevators.

On the 21st floor, the square tower starts to transition to an octagonal shape. Four allegorical busts representing Law, Science, Philosophy and Art are carved into the corners of the tower, reaching from the 22nd to the 25th floor. The cupola is dominated by large windows on all four sides, each topped with a pediment. Four stone eagles act as flying buttresses from the top of the cupola to the beacon atop the tower. The building is topped with a 23 foot tall lantern “symbolizing the higher aspirations of Louisiana”. 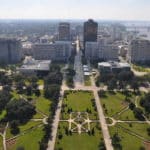 The Louisiana Capitol Garden comprises 30 acres, mostly to the south and east of the capitol. Azaleas, camellias and magnolias, the state flower of Louisiana, as well as live oak adorn the garden and the sidewalks are lined with boxwood hedges. The remains of Huey P. Long are interred in the criss-crossing walks, marked by a 30-foot-tall monument, including a 12-foot bronze statue of Long.

A visit to Baton Rouge should certainly include a tour of this magnificent building. Admission is free. The Capitol is located approximately 9 miles from The Stockade Bed and Breakfast and should definitely be on your itinerary when you visit Baton Rouge.