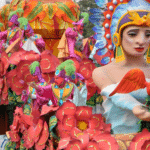 Once New Year’s celebrations are over, it’s time to get ready for one of the best events in all of Louisiana – Mardi Gras! Time to practice those phrases, “Throw me somethin’ Mister” (well known as the proper expression to beg for beads as the floats pass) and “Laissez les bon temps rouler” (a Cajun French expression meaning “Let the Good Times Roll!”).

Baton Rouge has a Mardi Gras celebration, as does New Orleans and Lafayette.  Each of these cities is about an hour’s drive from Baton Rouge, therefore, the best place to stay during the Mardi Gras season is The Stockade Bed and Breakfast in Baton Rouge.  Book your stay now and plan to spend enough time to get the most out of this unique experience.

Many traditions go along with the celebration of the Carnival Season. Here are some fun facts concerning this popular season of the year:

Mardi Gras has been taking place for centuries, so naturally, there are many traditions and a great deal of trivia associated with the event. Watch for our next blog on Mardi Gras Trivia (Part II), but don’t wait to reserve your room at The Stockade Bed and Breakfast. Book now!