On the West bank of the Mississippi River, in Vacherie, Louisiana, upriver from New Orleans, sits two very different historic plantations, less than 4 miles from each other: Oak Alley Plantation and Laura Plantation. The design of Oak Alley is Greek Revival architecture and is the type of plantation most people picture when they hear the word “plantation”. Laura Plantation, on the other hand, is a restored historic Creole plantation. Both are on the National Register of Historic Places. 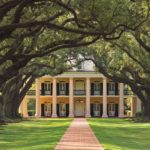 Oak Alley Plantation received its name from the double row canopy of southern live oak trees stretching from the home all the way to the River Road along the banks of the Mississippi River. The oaks were planted in the early 18th century, long before the house was built. Oak Alley Plantation, previously known as The Bon Séjour plantation, was established by French Creole Valcour Aime when he purchased the land in 1830 primarily to grow sugarcane. He was known as the “King of Sugar” and was one of the wealthiest men of the South. The mansion was completed in 1839, built entirely by enslaved labor.

The mansion has a square floor plan, with a central hall that runs from the front to the rear on both floors. The rooms all have high ceilings and large windows. The exterior features 28 columns on all four sides. One can just imagine the family sitting on the veranda sipping mint julips or iced tea, gazing at the stately oak trees and gorgeous gardens.

Bricks used in construction were made on the site. The walls are 16” wide and are finished with stucco on the exterior and plastered on the interior. The roof is made of slate.

The grounds include a formal garden, a blacksmith shop and the Stewart graveyard, along with a restaurant and B&B cottages. 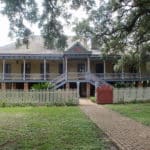 Laura Plantation, formerly known as DuParc Plantation, is significant for its early 19th-century Créole-style raised big house and several surviving outbuildings, including two slave cabins. Formerly, a slave infirmary, 69 cabins and communal kitchens were located on the property. Each slave cabin was occupied by 2 families, as duplex units which shared a central double fireplace. A vegetable garden, chicken coop and pigpen were located near each cabin. There were 186 slaves working the farm by the time of the Civil War. The DuParc Plantation exported indigo, rice, pecans and sugarcane.

Laura Locoul Gore, for whom the plantation is named, was the fourth mistress of the plantation. She was born in the house in 1861 and inherited it and ran it as a sugar business until 1891, when she sold the plantation to Aubert Florian Waguespack whose family resided at the plantation and lived there until 1984.

On August 9, 2004, Laura Plantation was significantly damaged due to an electrical fire which destroyed 80% of the house, including the kitchen wing behind the house. Restoration work was completed in 2006 but the kitchen wing was never rebuilt.

The story of Laura Plantation and Laura Locoul Gore is fascinating and well worth the one hour tour.

Seeing both plantations are recommended as they represent very contrasting stories and present a more indepth glimpse into the history of plantations in Louisiana. The plantations are located about an hour’s drive from The Stockade Bed and Breakfast and both can easily be toured on a day trip.