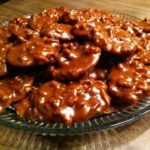 Pralines can be found all over Louisiana, in candy shops, gift shops and tourist centers, to name a few. Louisiana would love to claim this special candy as its own creation, however, pralines were probably first made in France. Pralines are basically made from cream, sugar, butter and nuts – pecans in Louisiana. What’s not to love???

According to the “Eater” blog, Rien Fertel, who has done extensive research on the praline’s history, says the first account he found of a local newspaper mentioning pralines in New Orleans was during the Civil War, in an 1862 ad for holiday “chocolate pralines” at a confectionary shop in the French Quarter. The French praline likely came to New Orleans brought by French settlers in the very late 1700s. No doubt, the Louisiana praline recipe was developed because of the existence of the sugarcane industry as well as plentiful pecan trees. Fertel believes that vendors began selling pralines on the streets of New Orleans as early as the 1860s.

Though many people lay claim to creating the praline, it is said that the culinary genius of African-American women created the New Orleans praline as we know it today. They apparently knew that good pralines should be creamy and have a melt-in-your-mouth texture.

What does a Louisiana praline look like? Imagine a muddy swamp, frozen solid, with cypress knees jutting out the top – that’s a good way to describe the way a praline looks, the pecans being the cypress trees.

The basic technique for making pralines is to combine sugar and cream or milk in a pot and boil it to about 234 – 240 degrees F. Once it reaches this temperature, other ingredients like nuts and vanilla are added, then the mixture is beaten just until it just begins to set up. Once it begins to thicken, the candy is dropped by spoonful onto wax paper into patty shapes and left to harden.

As with many of the foods brought to Louisiana or created by our ancestors, the making of this candy is a dying art. A lot of the younger generation just doesn’t want to fool with it. It’s just easier to find it already made.

For more on the history of pralines, see the Blog by the Eater: