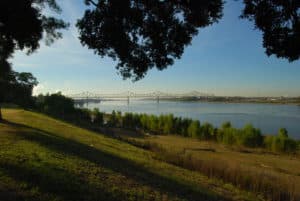 It’s no surprise that many people include a stay in Baton Rouge when they visit Louisiana. Being the capital of our state, it garners a lot of interest for its history, culture, food and scenic views. It’s also no wonder that people from all over the world look forward to catching a glimpse of the Mighty Mississippi River when they visit. Thus, tourists visit Baton Rouge where its most popular scenic view IS the Mississippi River.

In the early 1800’s, both sides of the river were lined with cotton, sugarcane plantations and thriving towns. The river was truly a major highway filled with barges, keel boats, steamboats and other vessels, many used to ship agricultural and industrial goods. Reflecting on those bygone days, it’s easy to get caught up in the romance of the river. Mark Twain (Samuel Langhorne Clements) was largely responsible for revealing the river’s colorful lifestyle in his novels, particularly Adventures of Huckleberry Finn and The Adventures of Tom Sawyer. Since then, the landscape of the Mississippi River has changed dramatically. Towns that exist along the river are hidden behind high levees built to protect them from flooding and only the tops of magnificent plantations can be seen from riverboats. Refineries line the river and there is much traffic from barges, tugboats and ships from all over the world. But the grandeur of the river, from its headwaters all the way to the mouth of the Mississippi River, holds interest for almost everyone in one way or another. 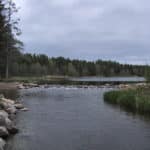 The river is the second-longest on the North American continent. Because of the expanse of the river, it is interesting to note the difference between its headwaters, 1,475 feet above sea level, and its end as it empties into the Gulf of Mexico. The river is only about 3 feet deep at its source at Lake Itasca State Park in northern Minnesota; its deepest point is 200 feet deep near Algiers Point in New Orleans. It flows from Minnesota south to the Mississippi River Delta for 2,552 miles. At the headwaters, the average surface speed of the water is about 1.2 miles per hour. In New Orleans, the river flows at about 3 miles an hour.

Locals who see the river all the time, rarely ever “see” it as tourists do. Baton Rouge is a wonderful place to fall in love with the romance and magnificence of the Mississippi River. Book your room now at The Stockade and hike behind the house where the Mississippi River used to flow.